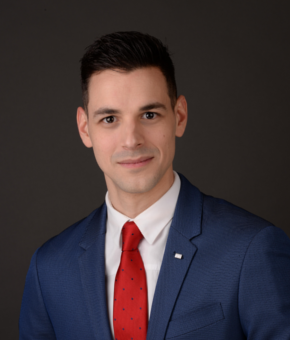 Doctor Filipe Nadir Caparica Santos, 34, lived in Canada as a boy and teenager for over four years. However, when he started his journey at Unicamp at the age of 17, he could never imagine that 17 years later he would be appointed faculty member at the largest Canadian university.

Caparica Santos was admitted to medical school at School of Medical Sciences (SMS) of University of Campinas (Unicamp) in 2003. He briefly interrupted his program for a year in 2006 to undertake research at Harvard Medical School and the University of Texas at Southwestern Medical School at Dallas and graduated in november, 2009. He later completed his residency in Anesthesiology at Unicamp and worked as a staff anesthesiologist at Unicamp from 2014 to 2017.

In 2017, Caparica Santos completed a PhD program at the Pharmacology Department (SMS/Unicamp) under the supervision of professor Angelica de Fatima de Assuncao Baga. His PhD thesis looked at how to reduce the risk of the residual effects of an anesthetic class of drugs known as muscle relaxants after general anesthesia.  His findings were published in the Brazilian Journal of Anesthesiology and Medicine journals.

Soon after, Caparica Santos started his journey in Canada. He completed a fellowship program in “Simulation and Anesthesia Education” at St. Michael's Hospital at the University of Toronto (UofT) and was awarded the “FitzGerald Academy Clinical Skills Teacher Award” and “Teaching Excellence Award” by the Faculty of Medicine in recognition of the passion, enthusiasm and sustained excellence in the teaching and support of undergraduate medical students at the university.

Caparica Santos was appointed an Assistant Professor and Staff Physician of the Department of Anesthesia, St Michael’s Hospital, University of Toronto last July. He has taken the role of fellowship coordinator at the department and has been involved in multiple teaching and research activities focused on feedback and coaching skills, debriefing frameworks, clinical fellowship education and neuromuscular blockers. The simulation program at St. Michael’s hospital was recently featured on CBC, Canada’s largest TV network, with participation of Dr. Caparica Santos (link).

In his own words, being appointed assistant professor at UofT was “a dream come true”. Looking ahead, his current goal is to create clinical fellowship curriculums that will aid International Medical Graduates transitioning to these programs in Canada. He looks forward to completing his Master of Science in Health Practitioner Teacher Education, at the Dalla Lana School of Public Health (UofT) later this year. He also hopes to be able to connect with the rich Brazilian academic community in the anesthesia field, engaging in collaborative simulation and medical education projects, workshops and research.

CBC: Dr. Caparica Santos participated and gave an interview to the largest TV network in Canada for an episode aimed at sharing the role of Simulation in Healthcare and education at St. Michael’s Hospital. See here.

Caparica Santos Profile at the Department of Anesthesia, Faculty of Medicine of the University of Toronto website.